AgSouth Announces Change in Board of Directors 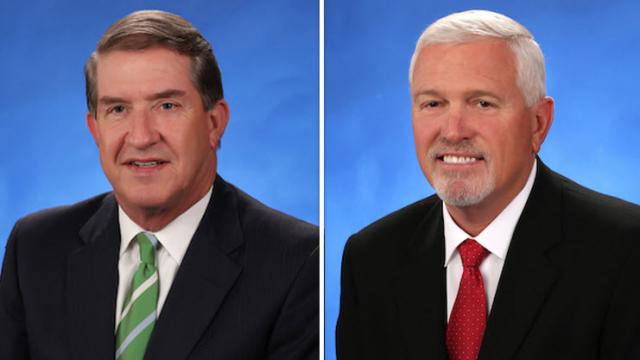 STATESBORO, GA (February 12, 2020): AgSouth Farm Credit CEO Pat Calhoun announced that AgSouth member and director Hugh Weathers has been elected as Chairman of the Board. Frank Ables, Jr., was elected as Vice-Chairman. Both will serve a 2-year term in their roles as leaders of the board of directors.

Hugh Weathers Elected Chairman and Frank Ables, Jr. Elected Vice-Chairman of the Board

Weathers is a row crop farmer and farm property landlord and serves the state of South Carolina as the Commissioner of Agriculture. He serves on the boards of Southern United States Trade Association, the South Carolina Poultry Federation, the Southern Association of State Departments of Agriculture, Catch the Vision Ministry and the South Carolina Department of Commerce Coordinating Council. Weathers is Vice-Chairman of AgSouth's Executive & Compensation Committee. He has been a director of AgSouth since 1998.

Ables is a poultry and beef producer and is a farmer of row crops, wheat, corn and soybeans. He serves on the Oconee County Conservation Bank board and is a member of AgSouth’s Risk Management Committee. He also serves as Chairman of AgSouth’s Executive and Compensation Committee. Ables has been a director of AgSouth since 2015.