How Hard Work Made This Refugee a Poultry Farmer 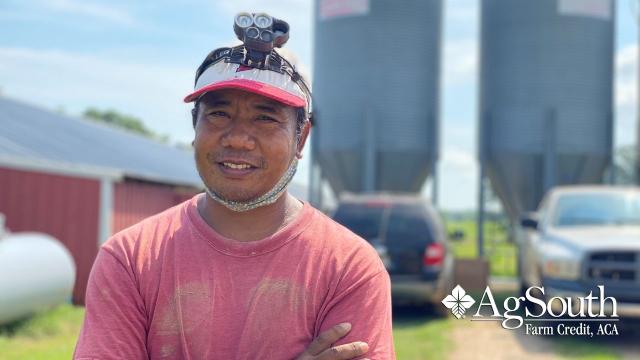 Z Kam, Z, Pastor Z, Pastor…the list of names for this Carrolton, Georgia poultry farmer goes on and on. Z moved to the United States on December 12, 2008 from Myanmar (previously Burma) where he was a refugee facing persecution due to his Christian beliefs and practices. As for why he and his family left Myanmar to come to the United States, he stated, “It was time to leave to seek freedom and liberty.” Z has been married to his wife for 27 years and they have three daughters and two sons together, ranging from 25 to nine years old.

Farming is Different in America

Z purchased his poultry farm in quaint Carrolton, Georgia just over two years ago in 2019. The farm is home to six poultry houses, nearly 120,000 chickens, and his family. Although his farm in Georgia is relatively new, farming in general is nothing new to Z. He was born on his family farm in Myanmar where they grew rice, corn, potatoes, and all kinds of other vegetables based on the season.

There are many differences Z has faced between farming in Myanmar versus here in the United States. He emphasized the tediousness of farming in Myanmar where he recalls “working all day with small tools,” which made even simple tasks time consuming. Beaming with joy as he pointed to his tractor, Z now owns tools that simplify some of the heavy lifting and time consuming tasks required of running a farm.

Growing up on a farm in Myanmar with 14 brothers and sisters was a unique experience. He recalls some of his favorite memories which came from following his father around in the early morning on the farm. Z has based his lifestyle on a foundation of hard work, and emphasizes that hard work is a crucial to success. No matter where you farm, hard work is always in the equation. This message comes largely from his father, who Z remembers saying, “Don’t be lazy. If you are lazy, you are going to be hungry. Don’t raise your hand, let your hand work and your hand will feed your mouth.”

Z did not begin his life in America as a farmer. He started off in Indiana where he worked in a warehouse. He was then invited to visit a pastor in Atlanta, where he worked for two years, before deciding he needed to go back to school. Z obtained his medical associates degree from Westwood College. He became a medical assistant for three years, learning more and more each day, but ultimately decided that he needed to find a different occupation that would be more beneficial to him and his family’s future. He is driven by hard work and providing a good life for his children, which includes saving money for them to go to college.

Diving into research, and trying to decide what occupation would be a good fit, one of Z’s friends suggested he look into the world of poultry farming. He had tried aquaculture in the past, but decided that poultry farming was something that would work better with his lifestyle and interests. “I am glad that I am in poultry farming’” said Z, “It is the right fit for me.” Z learned about the business of poultry farming by researching and asking anyone and everyone who could possibly be of help to him. He brought up his interest in purchasing a poultry farm to his realtor who did not know anything about poultry farming.  He told Z, however, “If you are interested, we are going to learn together.” Working together, the duo sought out to find a poultry farm that would be a good fit for Z and his family. A friend helped educate him on loan types, which ultimately lead him to reaching out to AgSouth. Now, Z was ready to make his dream a reality.

Once jumping into the world of poultry farming, Z had even more research to do. Once he got his chickens, he needed to learn how to produce a good flock. “My responsibility is to take care of the chickens I get, and love them like my own babies,” said Z. “The chickens need love.”

The Power of Hard Work

Farming is never easy. There is always something new that needs to be fixed or upgraded, which Z accounts as some of the most challenging parts of his operation. “I am learning every day,” said Z. This statement exemplifies Z’s mindset of working hard to succeed. Z accounts his greatest success as having a job to go to each day. Z explained that although he has a slight language barrier, he has been met with countless jobs and opportunities in America. One of his greatest successes is being able to work every day and see his hard work on the farm come to fruition.

Z will never forget the check he got when he sold his first flock, stating “I had never seen a check that big.” It was a life changing moment for him and his family. After selling his first flock and seeing his hard work come to materialize in front of his eyes, he realized he found his place - being a poultry farmer is the job for him. Z also noted that not every flock will be the greatest and some things are in God’s hands. Even if he does everything properly, some flocks will not be as good as others. “Sometimes the chickens are good, sometimes they are bad,” stated Z. “It is out of my control. I can do everything right and sometimes it’s still not the best flock. Ultimately, it is up to God.”

As for advice for people who may be looking to start their own farming operation, Z has many words of wisdom. He highlighted the importance of finding a community and leaning on that group for assistance. You never know how certain community members may be able to help you on your journey. Yet again, he pushed the notion of hard work. “Don’t chase the money or concentrate on the money. Focus on hard work,” said Z.  “If you don’t work hard, you will not achieve your goal. You need to work hard and be dedicated.” In addition to hard work, he also stressed the importance of decision making. “You will be faced with decisions to make in your everyday operations, and you need to be able to not only make a decision, but the right decision." He also wants to emphasize the importance of research before diving into a farming operation. It is so much more than just you and your farm, but dealing with electricians, plumbers, and so much more.

So what’s next for Z? “A grocery store would be a good fit for me,” he says, proudly. When he decides to retire, Z hopes to open up a grocery store to support the local Burmese community that have farms of their own. He plans to sell their products. “If someone asks me about my experience, if I share my story, maybe it will encourage others. One way or another it will benefit them. My purpose to share to everyone is hard work. You need hard work for success."