Own a Country Dog? Keep Them Safe With These 4 Veterinary Approved Tips 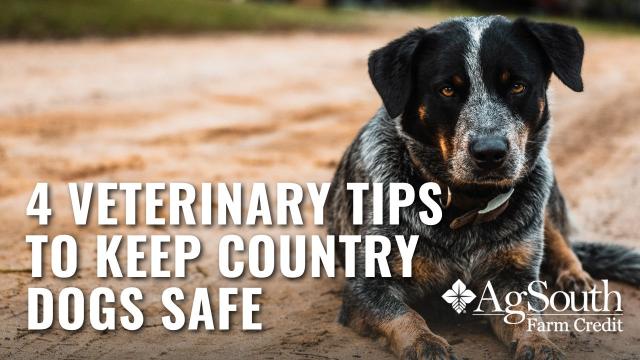 Own a Country Dog? Keep Them Safe With These 4 Veterinary Approved Tips

One of the benefits of owning land or running a farm, is the type of life you get to provide your four-legged friends. There is nothing better than watching your dog be a dog! But all that space to roam can come with an increased risk of injury, so owners should be aware of common incidents veterinaries see in country canines.

Use these four tips to keep your country dog safe from Dr. Chanda Thompson, DVM, owner of Thompson Veterinary Services in Barnesville, Georgia.

Be aware of your dog when working the land or livestock

There’s nothing better than having man’s best friend accompany you on a long day on the farm. They make for great company up in the tractor and can be helpful when working cattle when trained. But just like how you can get hurt working, so can your dog.

“We have sutured up a lot of dogs who got their paws hung up in the head gate when their owners were working cattle,” says Dr. Thompson. “Most farmers have a lot going on when working their livestock but try and be aware of where your dog is at during that time.”

Another common occurrence in the country is injuries to older dogs.

“Watch older dogs around tractors and other large farm equipment. We get a lot of calls on older dogs who have become deaf and get hurt by large machinery. They lay up under the tractor to take a nap and they don’t hear it crank up and get rolled on. If you have a dog that is seven years or older, know that their hearing is like a 70 or 80 year old person and is not what it used to be.”

Other than your typical snake or coyote fight injury, one thing that is surprising to country dog owners is how deer can attack their dogs.

“We see dogs being attacked by deer especially when the deer have a baby close by. They will stomp a smaller dog and hurt them pretty bad,” says Dr. Thompson.

Another common occurrence at Thompson Veterinary Services is anemia caused by rat poison.

“The owners will put out the rat poison, and the dog won’t eat the poison directly but will eat the dead animal. That’s a really common one I see.”

A common vaccine for your dog is rabies. Most major cities require it if you’re a dog owner, but when you live in a rural setting, you might not have that obligation. Dogs that live in the country need this vaccine more than those that live in town.

“It’s really common for country dogs to come back with some type of injury and you’re not really sure what it’s from,” says Dr. Thompson. “It’s likely they got into a fight with a coyote or even a raccoon. This is why the rabies vaccine is so important. Typically, if they survive the fight, for several months you have to worry about rabies symptoms popping up.”

Most people are aware of the importance of getting the rabies vaccine, but did you know about a rare but serious disease called leptospirosis?

“It’s a virus that is carried in the urine of some animals, and if the dog ingests it from a mud puddle or some source of water the urine seeps in to, it causes organ failure,” says Dr. Thompson. “It’s rare but serious so we advocate for that vaccine along with rabies for dogs that roam.”

Although, not a vaccine, flea and tick prevention is equally as important.

“Right now, our clinic is seeing a ton of tick diseases in the dogs AND the owners, so tick prevention is key.”

Not all running water is safe water

With all those acres to run around on, your four-legged friend is bound to get thirsty. Letting dogs be dogs and drink out of the creek sounds like a good idea, until you’re faced with a pooch that won’t stop throwing up.

“There are bacteria in creeks and rivers that can cause some GI related issues. If your dog is having prolonged diarrhea or vomiting and you have a creek flowing on your land, that is something to think about if those symptoms pop up.”

Heat exhaustion and dehydration in the south are also common among country canines. Depending on how much land you let your dog run around on, try to have a couple options of fresh, clean water around and a designated place they can cool off in the shade.

So what’s a country dog owner to do?

The perks of living in the country for your dog far outweigh the risk, and some injuries are just inevitable with country life. But there are a few things you can do to minimize the bigger injuries. The first is just being aware of your dog and where they are at. Other ways can include investing in dog training and using GPS tracking collars to help keep tabs on your pooch.

“Have them trained to stay close to you or to teach them to know where they can and cannot go on your property,” says Dr. Thompson. “Dogs are really smart, and at the end of the day they just want to make you happy.”

Want to buy land for your dog to play?

If you're looking for land in South Carolina or Georgia and have questions or would like to get started, one of our loan officers would be more than happy to help. Find an AgSouth Branch near you!